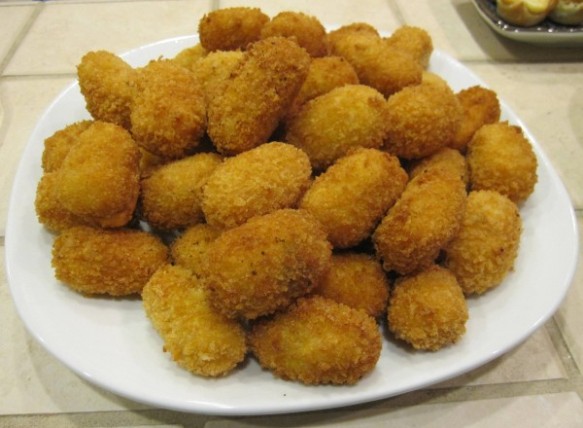 My very first boyfriend was a friend of my brother’s. A tall, young man of Spanish descent, he was a fun guy with a great sense of humor. The first time I met him, he was completely bald. I don’t remember if he shaved his head on a dare or whether he lost a bet, but it was a pretty gutsy thing to do, especially in those days when being bald was definitely NOT the in thing to be. We were in high school and crazy about each other. But like many teenage romances, a long-term relationship wasn’t in the cards for us and we ended up going our separate ways. We’re both married with kids now, but we’re still friends to this day. He lives with his family in Spain where he works as a chef. This recipe is his. He wrote it out for me in a mixture of English and Spanish with the measurements in the metric system. I re-wrote it to make it a little more understandable and put in the American equivalents for the metric measurements.

Croquetas or croquettes are little fried dumplings which are very common all over Spain. Every tapas bar serves them and every housewife has her own favorite recipe. It’s my understanding that they sprung from very humble beginnings – it was a way to incorporate leftover scraps of ham or fish with cheap ingredients so they wouldn’t be wasted, but instead resulted in a whole new dish.

The most popular croquetas are made with jamón Serrano (Serrano ham), bacalao (cod), pollo (cooked chicken), or atún (tuna). However, croquetas are very versatile and lend themselves to almost any “add-in” you can think of, like carne molida (ground beef), setas (mushrooms), espinaca (spinach), camarónes (shrimp), queso (cheese), and so on. These little dumplings are so delicious with their creamy, soft interior and crispy, golden exterior. They practically melt in your mouth! Once you start eating them, it’s hard to stop at just one!

NOTE:  These instructions are for meat, fish or vegetable croquetas. If you want croquetas de queso (cheese), cook the mixture for 4-5 minutes in Step 12, remove the bechamel from the heat, add the grated cheese and stir to blend well, then transfer to a pyrex dish and continue on with the recipe.