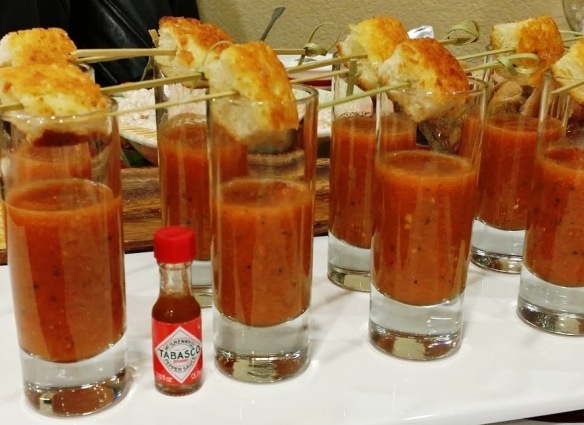 I love Gazpacho. It’s a filling and refreshing soup that’s perfect on a hot summer’s day. Gazpacho is a traditional Spanish dish. It’s popular all over Spain and is made from a mixture of fresh raw veggies that typically include tomatoes and cucumbers. The soup also includes oil and vinegar, and in many cases, stale bread is added. The ingredients are pureed into a soup which is then served cold.

I really like Ina Garten’s recipe from her classic Barefoot Contessa Cookbook. I usually make it when we want a light lunch, or when the weather outside erases my willingness to slave over a hot stove. Today I decided to serve the Gazpacho as an appetizer for a party. I poured it into shot glasses and balanced a little parmesan crouton on top of each glass. Don’t they look cute?

NOTE:  To make the parmesan croutons, slice some hearty French or Italian bread into cubes and place them in a ziploc bag. Pour in a little melted butter and some grated parmesan cheese. Zip the bag closed and shake until the bread cubes are well coated. Spread them out in a single layer on a cookie sheet and bake at 350ºF until they’re crisp and golden brown.