Unlike its name, French Coconut Pie did not originate in France but was actually invented in America. Wherever it originated from, it’s one of the easiest pies you’ll ever make and tastes amazing to boot! You can make your own pie crust if you want to. I have a great recipe for homemade pie crust here. Or you could just purchase a ready-made pie shell from the grocery and save yourself some work. Either way, this pie turns out delicious! It’s literally a pie to die for.

A friend of mine shared a video with me that he had seen on YouTube for a cinnamon swirl apple pie where they showed you how to make this swirly pie crust. The pie looked like it was topped with flat little cinnamon rolls. So unusual!

Anyway, I had some apples I needed to use up so I decided to make a Caramel Apple Pie for dessert tonight, but I thought why not try using that fun technique for the top crust of my pie? I didn’t bother doing it for the bottom crust since no one would see that anyway. It turned out really cute! It made you feel like you couldn’t wait to take a bite out of the pie! I’m going to post the instructions here for making the cinnamon swirl top crust, but if you don’t want to go through the trouble, feel free to make this recipe with a plain crust on top.

I like to use 2 or 3 varieties of apples whenever I make an apple pie. I always start with 3 Granny Smiths for their tart flavor and firm flesh – perfect for baking. Then I add in some sweet varieties. I always add 3 Honeycrisp apples when Honeycrisps are in season because they’re sweet and juicy and have a firm flesh that doesn’t break down too much when baked. Then I include 2 Braeburns, or Galas, or Fujis, or Jonathans, any of which are great for baking because they’re sweet and hold their shape well throughout cooking. I find that the combination of tart and sweet adds a complexity of flavor that’s delicious in this American comfort food classic.

NOTE:  If you want to see the cinnamon swirl crust actually being made, click on the link above to watch the video my friend sent me.

I’ve had this recipe for years but hadn’t made it in a long time. One day, my daughter, Tissi, decided she wanted to make herself some quiche. She’s a veggie eater and she loves quiche so I dug up my recipe for her. The problem was when I wrote it out for her, I said it only needed one pie crust. Needless to say, she ended up with a ton of extra filling. It wasn’t until a couple of attempts later that I realized my recipe was actually for TWO pies! Poor Tis. She couldn’t figure out why the recipe wasn’t working for her. LOL! If you want to make just one pie, cut the recipe in half. Otherwise, make sure you have two pie crusts ready.

I had to take some appetizers to a party so decided to make mini seafood potpies. I love potpies but we usually make them with chicken. I thought seafood would make a nice change. You could do this with shrimp only or crab only. Or you can add lobster or scallops for more varied seafood. Just make sure your combination of seafood totals half a pound. If you like, you can double the filling recipe to make one deep dish potpie.

In the movie “City of Angels,” when Seth (Nicholas Cage) asks Maggie (Meg Ryan) to describe to him what a pear tastes like, she says, “Sweet, juicy, soft on your tongue, grainy like sugary sand that dissolves in your mouth.” It’s the perfect description for this unpretentious little fruit.

We don’t have pears in the Philippines so I’d never tasted them before coming to America. My mother-in-law (who was Dutch) loved them, though, so I always made sure to buy some whenever she came to visit. I learned to love them because of her. This recipe is actually one of the very first pies I learned to make when I arrived in the United States as a teenager. It’s an easy recipe and has long been one of our family’s treasured favorites. 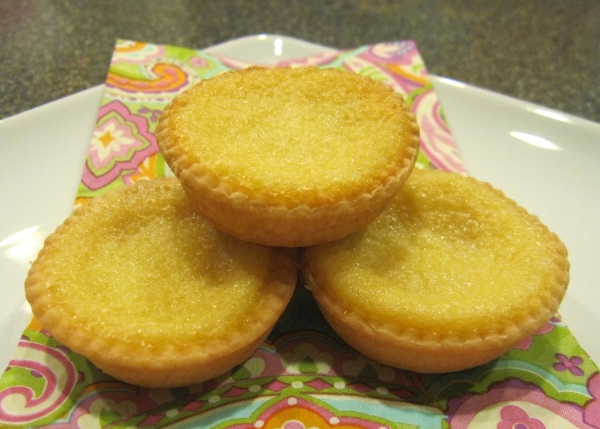 I throw a Mother’s Day Tea Party every year. It started out as just a little tea party for my Mom and my sisters, but since then it has evolved to include other relatives, friends, neighbors, their husbands and children. It’s a lot of work, but is also a lot of fun and has quickly become a family tradition.

This year, Mother’s Day is on Sunday, May 12, so I decided to make some Mini Chess Pies to serve as part of my menu. They’re always a hit when I make them. Even better, they’re super easy to prepare and they’re delicious. In fact, the hardest part about these pies is stopping yourself from eating the whole bunch once you pull them out of the oven!

NOTE:   If you would prefer to make your own pie crust from scratch instead of using ready-made refrigerated pie dough, here is a good recipe.

Someone at work gave me a bag full of gorgeous heirloom tomatoes from her garden. They were ripe, firm, and delicious. Is it any wonder that the French have referred to tomatoes as “pommes d’amour“ or love apples?

Actually, up until about the end of the 18th century, people believed tomatoes were poisonous. It wasn’t until 1808 that a Colonel Robert Gibbon Johnson of Salem, New Jersey proved everyone wrong. The story goes that he stood on the steps of the Salem courthouse and ate a whole basket of tomatoes in front of a crowd of people who were convinced he was trying to commit suicide in public. When he didn’t die or even get sick, people changed their minds about the lowly tomato. So let’s hear it for Colonel Johnson! Without him, we may never have had delicious dishes like this Tomato Pie.

This dish is a yummy, Southern favorite. If you want, you could cut down the fat by using reduced-fat mayonnaise and reduced-fat cheese, or you could try lessening the topping to 1/2 cup mayonnaise and 1 cup grated mozzarella cheese. It’s less rich, but still delicious. Ask my daughter, Yissi. She loves Tomato Pie!

NOTE:  If you want your pie to be juicy, omit Step 1 and just use your tomatoes as is. 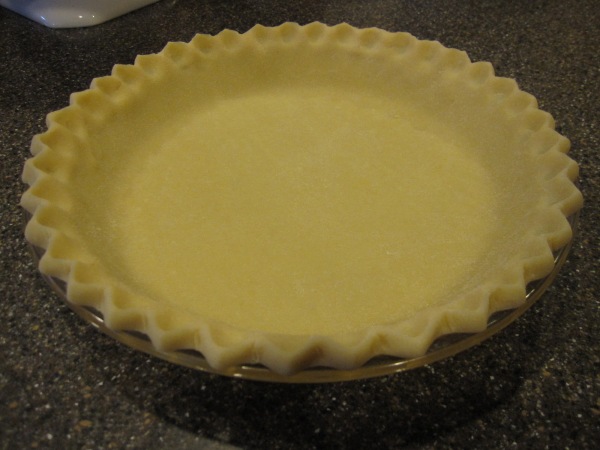 A lot of people are afraid to make pie crust from scratch for various reasons, but with a little bit of practice, making a great pie dough is easy to master. Just remember, you want your ingredients to stay cold as long as possible. Also, the less you handle the dough, the more tender the crust. Over-mix it and your crust could turn out greasy and tough. A food processor is the easiest way to go so if you have one, use it, but by no means is it an absolute necessity. You could just as easily make your crust by hand using 2 knives or a pastry blender to mix the butter and shortening into the flour.

NOTE:  Dough can be refrigerated for up to 5 days or frozen for up to 2 months.