Megan and Izzy are two of Bashful’s best friends from the city we used to live in before we moved. The girls are here on a visit and will be spending the weekend. It’s always nice when they come to visit. They’re such sweet girls and the three friends have such a blast whenever they’re together. It’s cool how the friendship between the girls has never faded, even though we moved so far away.

Anyway, I wanted to make something fun for breakfast so decided to make Aebleskiver. Aebleskiver (pronounced ey-bluh-skee-wuh) are light and puffy Danish pancakes shaped like little balls. They’re most commonly served around Christmas time in Denmark. They can be a little tricky to cook – turning them takes practice – and you’ll need a special pan to make them. Aebleskiver pans have little round wells in them and were traditionally made from cast iron, though nowadays they sell really good non-stick ones. Danish cooks use long knitting needles to turn their aebleskivers in little quarter turns while they’re cooking. You can use wooden skewers or a fork, though I would rather turn them with a teaspoon than a fork because it’s easy to puncture the little spheres.

When I make filled aebleskivers, I break from the traditional method of cooking them. Instead of turning each ball a little at a time, I cook one side, flip them over, then cook the other side. It’s much simpler.

Aebleskivers can be stuffed with any kind of filling you like. You can fill them with jam, peanut butter, fruit, chocolate, sausage, cheese, pretty much anything you can think of. I’ve filled them with leftover Christmas cranberry sauce. I’ve used canned apple pie and cherry pie filling. I’ve even done pumpkin butter served with cream cheese frosting on the side. This recipe is filled with Nutella. Now what could be better than that? Yum! 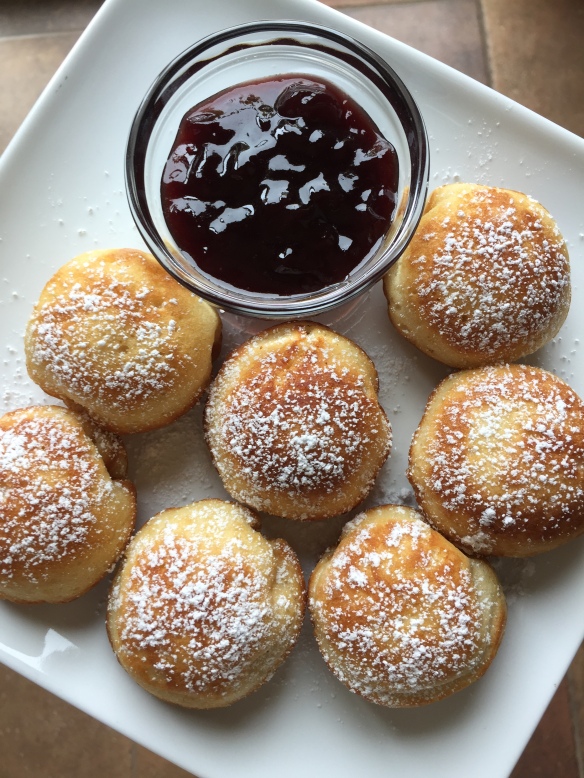 Aebleskiver (pronounced ey-bluh-skee-wuh) are puffy little sphere-shaped Danish pancakes. The name literally means “apple slices” in Denmark where they were traditionally filled with pieces of apple or applesauce. Since the 1600’s, aebleskiver has historically been served in Denmark at Christmas time accompanied by glogg or mulled wine. Nowadays you can find them pretty much year round. They’re often made plain, then sprinkled with powdered sugar, and served with jam. You also find them filled with a variety of sweet or savory fillings like chocolate, peanut butter, cookie butter, fruit preserves, fresh fruit like blueberries or raspberries, cheese, bacon, or sausage.

They’re cooked over the stove in an aebleskiver pan which looks like a deep frying pan with several round wells in it. You can easily find cast iron aebleskiver pans on the market or non-stick cast aluminum ones like the one made by Nordicware (which is the kind I have). The trick to making aebleskiver is to be patient. Take your time turning the little pancakes one by one in quarter increments so you end up with a perfect little round ball. It takes some patience, but with practice you’ll have the hang of it in no time! Have fun!

NOTE:  If you want to see the traditional way to cook aebleskiver, watch this. It takes a little practice but you can do it!