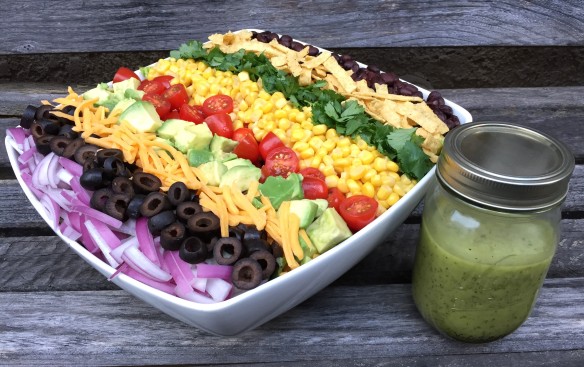 I always think of my daughter, Tissi, when I make this salad. Tissi and a friend of hers were discussing vegetarianism one day and he made her a bet that she couldn’t go without eating meat for more than 2 days. Tissi decided to take him up on it and she won the bet! The funny thing is, while she was trying to be all vegetarian in order to win, she realized she didn’t miss meat at all! So after her 2 days were up, she decided to just go on eating the way she was and she became a vegetarian for real! Has been for a couple of years now. Isn’t that funny? Anyway, when I make this salad and see all the colorful rows of veggies, I always think of my Tissi. You wouldn’t miss meat either when faced with a healthy, delicious salad like this one!

That being said, the “Tex-Mex” flavor of this salad makes it a great accompaniment to barbecued meat or chicken. It’s delicious alongside a pulled pork sandwich or some tender slices of smoked beef brisket. Sometimes I add crumbled bacon to it which makes it extra yummy in my book. After all, everything is better with bacon, right? (As you might have guessed, I’m not a vegetarian.) If you’re looking for a heartier, more filling salad that could stand alone as a light lunch or brunch dish, you could toss in some chopped grilled chicken.

The dressing for this salad has very little oil which makes it less fattening than other dressings, albeit rather thin. If you want a thicker, creamier dressing, try whisking in a half cup of plain greek yogurt. 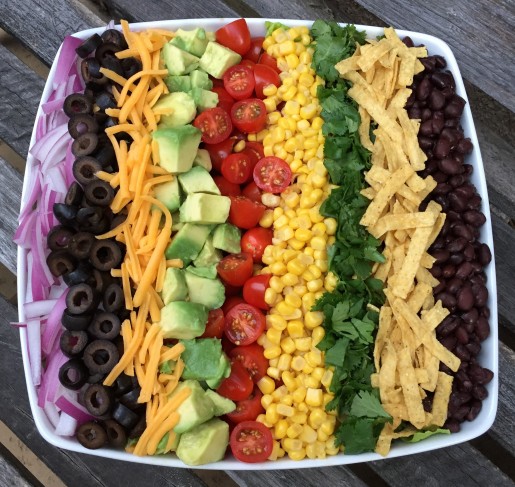