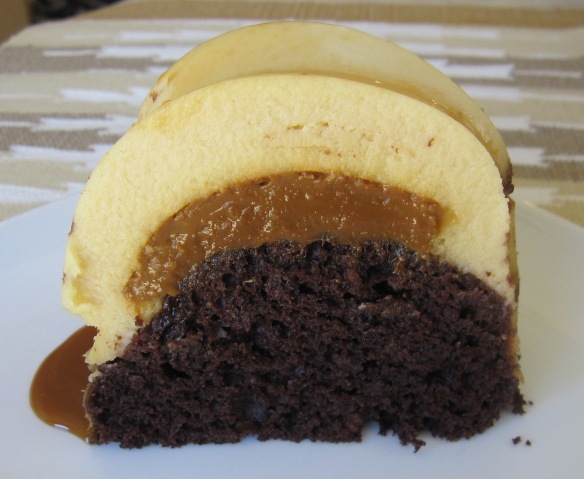 Growing up in the Philippines, we ate Leche Flan Cake all the time. Filipino Leche Flan Cake is a rectangular sponge cake with a thin layer of flan on top of it. It was a special treat and one that we kids loved. There was a canteen at my Lolo’s (grandpa’s) office that sold it for a few cents a serving.

I had never heard of “Chocoflan” Cake until I came to the United States. It’s apparently a Mexican favorite and is just like Filipino Leche Flan Cake only made with chocolate cake and with a much thicker layer of flan. It’s also baked in a bundt pan instead of a rectangular cake pan.

When I originally learned to make Chocoflan Cake years ago, you poured cajeta sauce over the cake before serving. I didn’t like that very much. I thought the cajeta sauce was way too sweet and had a flavor I didn’t particularly care for, so I dropped that step. We also used whole milk in the flan but I like the richness imparted by evaporated milk much better. One day I thought, “what if I add some dulce de leche as a surprise layer in the dessert?” That idea turned out to be a big hit with my kids so I’ve done it that way ever since.

I have to warn you, whenever I make this cake, the dulce de leche layer never ends up in the same place! Sometimes it ends up right at the top of the cake, sometimes it sits in the center between the flan and the cake, sometimes it’s thicker on one side than on the other, sometimes it’s all pooled on one side with nothing on the other! I have tried numerous times to make it end up consistently at the top of the cake to no avail. I finally gave up. Who cares? The point is, the cake is to die for and the little surprise bites of dulce de leche are absolutely scrumptious! You’ve really got to try this recipe. I promise it’s worth every bite! 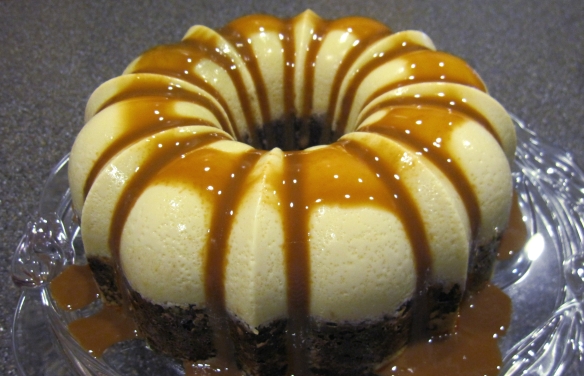 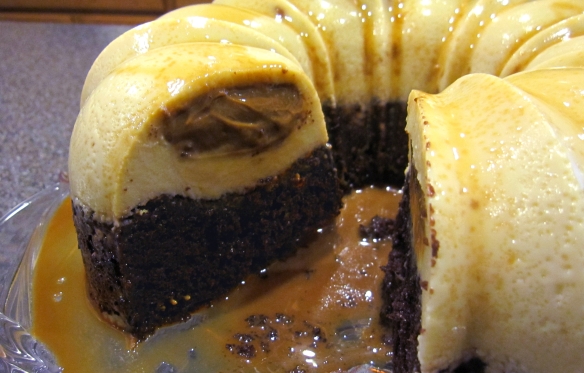 NOTE:  Chocoflan Cake is best prepared a day or two in advance and kept refrigerated until ready to serve.