I’ve had this recipe for years but hadn’t made it in a long time. One day, my daughter, Tissi, decided she wanted to make herself some quiche. She’s a veggie eater and she loves quiche so I dug up my recipe for her. The problem was when I wrote it out for her, I said it only needed one pie crust. Needless to say, she ended up with a ton of extra filling. It wasn’t until a couple of attempts later that I realized my recipe was actually for TWO pies! Poor Tis. She couldn’t figure out why the recipe wasn’t working for her. LOL! If you want to make just one pie, cut the recipe in half. Otherwise, make sure you have two pie crusts ready.

One of the nurses at work gave me her recipe for blueberry french toast several years ago. She loved it because it was very easy to make and could be prepared the night before so it was perfect to take to an office potluck. I had to agree with how easy it was to make, not to mention how delicious it was. I love biting into a little chunk of cream cheese when I’m eating it. The sweet-tart blueberries make the perfect backdrop to each creamy bite. And my blueberry sauce gives it just the right finishing touch.

I love making this casserole with brioche bread which is soft and silky and has a very thin crust. If you can get your hands on some brioche, give it a try. It makes a rich and wonderfully delicious french toast.

NOTE:  My kids like a lot of sauce so when I make this, I double the sauce recipe. You could also skip it and just serve this with plain syrup if you don’t feel like going the extra step of making the blueberry sauce.

This is an old Bisquick recipe and is delicious served as an appetizer or for a light lunch or brunch dish. It’s easy to make and is a good way to use up extra zucchini when it’s in season. I think the addition of oregano adds a bright herby flavor to this dish but you could omit it if you like, or substitute a different herb like thyme or savory. 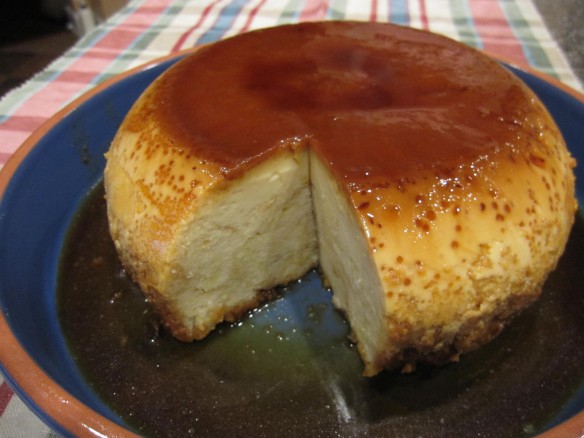 This bread pudding was made without the raisins.

My Mom used to make bread pudding for us all the time when we were growing up. It was a good way to make use of stale bread or left-over crusts that she had removed from sandwiches for a party. She would coat her pan in caramelized sugar which would turn into a sort of self-basting syrup for the bread pudding so there was no need to make any kind of sauce to serve with it. We loved it!

The raisins are traditional. I always liked them in my bread pudding but I remember my little sister didn’t so she used to pick them out. It’s totally fine to leave them out if you prefer a bread pudding without raisins. The recipe still turns out delicious even without them!

Rum-raisin is a common and well-loved flavor combination, but sometimes, just for a change, I replace the rum with cinnamon. I mean, who doesn’t love a slice of buttered cinnamon-raisin bread? Right? And that’s what it tastes like.

Mom also had what she called her TIPID VARIATION (economical variation):

I call this quiche “Real Man Quiche” in homage to the book “Real Men Don’t Eat Quiche” that was published in the early 80’s. Well, in my family, the men are as real as they come and they do eat quiche – specially when the quiche is a giant, meaty one like this one. Number 1 likes this deep-dish quiche because he feels it doesn’t leave him hungry like a wedge of regular-size quiche does. It’s basically the same as a normal quiche only with more meat and double the base ingredients. A springform pan makes it easy to unmold the big, heavy pie. Serve it with a salad or a nice bowl of soup and you have a filling, man-satisfying meal.

Jessica, one of my co-workers, gave me this recipe some months ago. It’s perfect for breakfast or brunch with the family or to take to a potluck with friends. The eggs puff up into a light, golden, soufflé-like dish that goes really well with sausage, ham or bacon; and the cheese provides a rich flavor that to me makes the addition of salt unnecessary.

This recipe lends itself to some interesting flavor variations so if you don’t want to serve a plain egg dish, you could add any one of the following ingredients to the mixture or try a combination of them:
1 large can diced green chiles
1/2 cup chopped mushrooms
2 stalks green onions, chopped
1/2 cup diced bell peppers
1/4 lb. bulk sausage, browned and drained well
any other ingredients you might want to try

As with any soufflé type of dish, the eggs puff up while baking but will start to fall shortly after removing from the oven so although it’s not entirely necessary, it’s nice if you can serve this dish as soon after taking it out of the oven as possible. 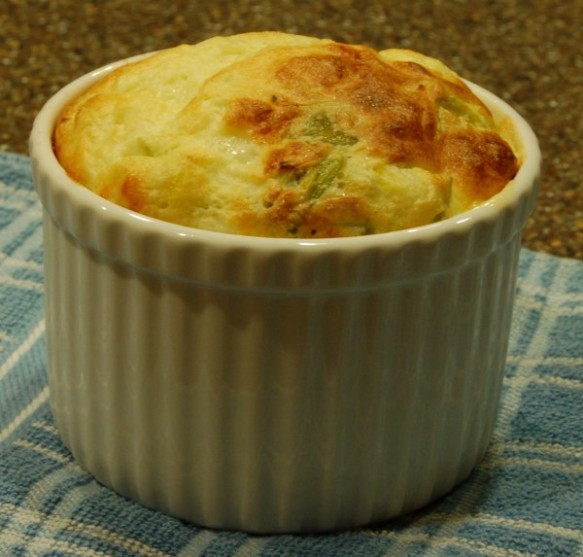 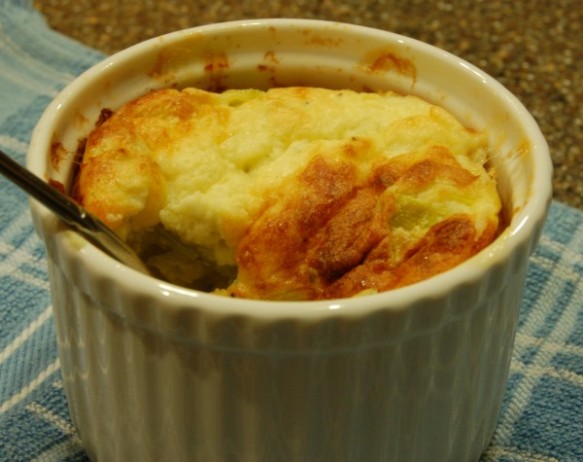 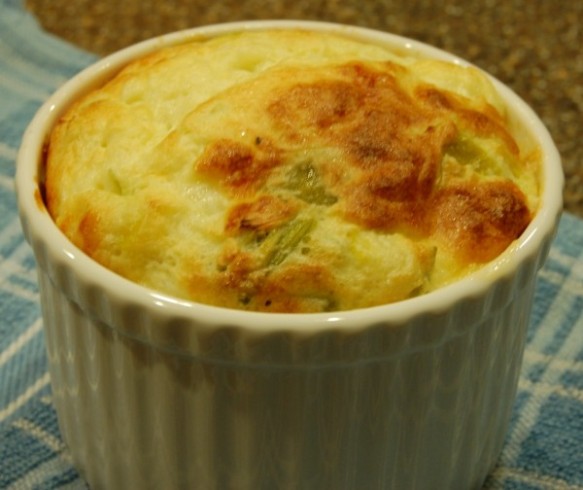 No. 1 decided he was going to try the South Beach diet. In an effort to help him, I decided to make him a South Beach friendly breakfast. I found a recipe for these little mini frittatas on a site called Kalyn’s Kitchen and decided to give them a try. They turned out pretty good! They’re easy to do and make a great grab-and-go breakfast when you’re in a hurry. They make perfect little snacks, too. You can make them with egg substitute like I did, or use real eggs or even egg whites. You can also add a variety of meats and vegetables. It’s a very versatile recipe and the muffins are really tasty. When you’re pressed for time and rushing to get ready for work on a busy morning, it sure is a big help to be able to reach into the fridge and grab a couple of these for breakfast!

NOTE:  Egg Muffins will keep for more than a week in the refrigerator without freezing. The muffins can be frozen and reheated in the microwave, but freezing makes them release water when they’re microwaved so it’s better if you can just keep them refrigerated.