This is an old recipe that I got from one of my first cookbooks many, many years ago. Hummingbird Cake is basically a banana-pineapple-nut cake. It’s moist, delicious, and absolutely addictive. I usually bake it in a bundt pan and serve it plain, but you could also bake it in three round cake pans and frost each layer with a cream cheese frosting. Either way is delicious and will have you humming with delight!

NOTE: If desired, cake may be baked in three 9-inch round cake pans. If using three cake pans, bake at 350°F for 25-30 minutes. Allow to cool completely, then frost with cream cheese frosting.

Chocolate Ganache is used as a filling, a frosting, or a glaze for cakes and pastries. It’s very easy to prepare. This recipe is wonderful made with a good quality chocolate like Scharffenberger chocolate, but it’s just as good made with chocolate chips.

Make sure the chopping board, bowl, and utensils you use are completely dry because water will cause the chocolate to seize when it’s melted. Also when working with ganache, bear in mind that while it’s warm, it’s liquid and pourable, but it thickens and firms as it cools. If you need to soften it, just pop it in the microwave for a few seconds and stir. 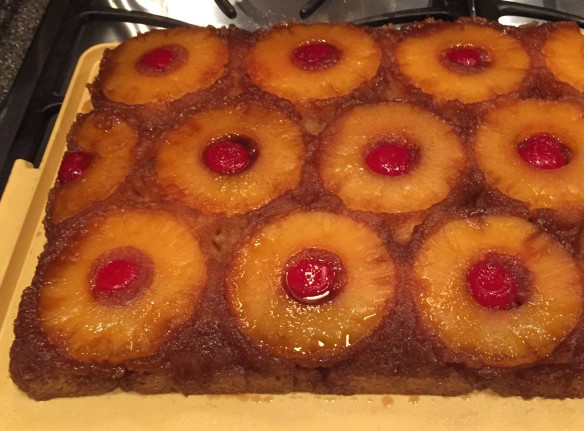 My mom used to make this cake for us all the time when we were growing up. Pineapple Upside Down Cake is an old-fashioned cake that sort of died down in popularity over the years. It’s delicious, though, and definitely deserves a comeback. I’ve altered my Mom’s original recipe to make the cake more moist and added more pineapple to it, but the basic recipe is still hers. It’s easy to prepare and my family loves it judging by how quickly it disappears every time I serve it!

NOTE:  You only need one 20-oz. can of pineapple, but if you want to completely cover the top of the cake with pineapple rings like I have pictured, you’ll find one can is about 2 slices shy. My family likes a lot of pineapple so I add the second smaller can, but if you don’t want to bother with that, you can make do with one 20-oz. can and just space the slices farther apart so they’re evenly distributed. Bear in mind, if you do decide to use just one 20-oz. can of pineapple slices, you might be a little short on the pineapple juice. Different brands have different amounts. If you’re short, just add enough water or cooking oil to make 16 tablespoons.

This cake is a play on my Chocoflan Cake. I was making a Chocoflan Cake for Cinco de Mayo and I started thinking how fun it would be to make a coconut flavored flan cake, so I went out to buy ingredients for a test drive. It took a few trial runs over the next few weekends, but eventually my Cocoflan Cake was born! Thankfully my family doesn’t mind being the guinea pigs who have to taste and EAT all my kitchen experiments.

I like how this final version turned out. The dessert isn’t overly sweet, the cake is moist, and the flan is smooth and creamy. It looks like a lot of steps, but if you read through the recipe, it’s really not hard to do. Give it a try and you’ll see what I mean. 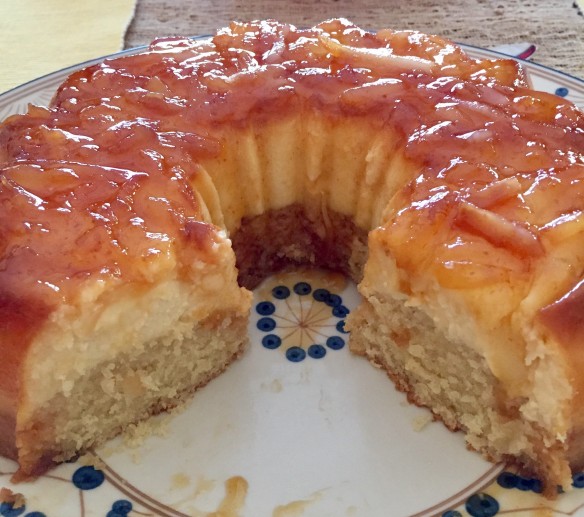 It’s blueberry season! Every year, my sister Helen takes her daughters blueberry picking with a bunch of their school friends and their families. They go to this blueberry farm up in the hills and have an absolute blast while they’re there. Helen’s youngest daughter, Sophie, is a little blueberry-picking speed-demon and can fill up a bucket faster than you can say blueberry pie!

Anyway, whenever they go, they always make sure to bring me back a bagful of the beautiful little blue gems. This year was no exception. The berries are always so sweet and juicy. If you’ve never had blueberries fresh off the bush, you’ve got to find a way to try some. Commercially sold blueberries are good, but they pale in comparison to these ones. I think it’s time for some Blueberry Buttermilk Cake! 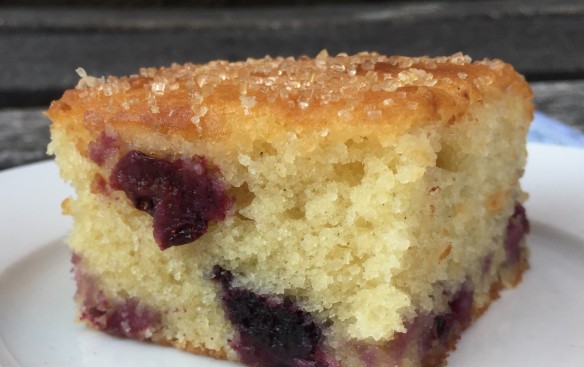 NOTE:  If you don’t have buttermilk, you can make your own homemade buttermilk by placing 1 tablespoon of lemon juice in a glass measuring cup. Add enough milk to the cup till it reaches the 1-cup line. Let stand for 5 minutes, then whisk with a wire whisk for a few seconds. 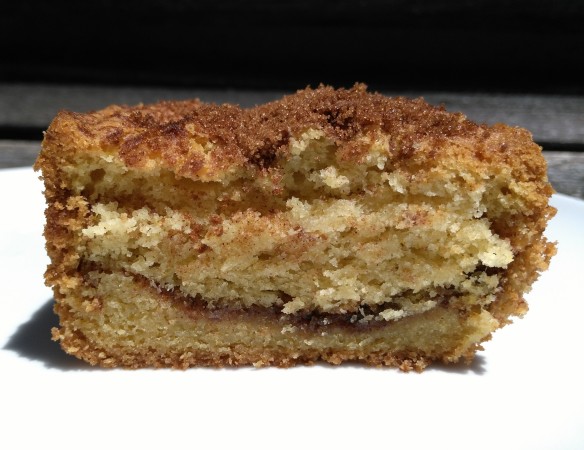 I keep trying to create gluten free recipes for my daughter, Spunky. It’s not always easy though. Especially with baked goods. You usually have to use 2 or 3 different non-wheat flours, and add specialty ingredients like xanthan gum, guar gum, gelatin, or agar-agar. And some things just don’t turn out right when you try to convert them using commercial gluten free flours.

That’s why I was so happy to discover Bob’s Red Mill Gluten Free 1-to-1 Baking Flour at my local grocery store. My sour cream coffee cake turned out great with it! It really took the guesswork out of converting an old family favorite into a gluten free recipe. I decided to research and learned that there are other brands of cup-for-cup flour replacements out there like King Arthur Flour’s Gluten Free Measure for Measure Flour, or Cup4Cup Gluten Free Multipurpose Flour, but since Bob’s Red Mill is what my local grocery store carries, that’s what I used for this recipe. I’ll have to experiment and test the other brands someday. If you have a favorite cup-for-cup gluten free replacement flour, feel free to try it out with this recipe and then let me know how it turned out.

Fall is pumpkin season. It’s the time when pumpkin farms do a booming business as people flock to them to pick out the pumpkins they want to carve into jack-o-lanterns for Halloween or put on display on their fall table centerpieces. But pumpkins don’t just make great decorations. They’re wonderful for eating, too!

Pumpkins make delicious soups, side dishes, and desserts. I mean what would Thanks-giving be without pumpkin pie? Well, this is an old recipe for the yummiest pumpkin cake you’ll ever bite into! Iced with cream cheese frosting and cut into squares, it’s a family favorite that’s ideal for taking to potlucks and office parties, too. It’s moist and delicious and my cream cheese frosting is the perfect showcase for the rich, not-too-sweet cake underneath it.

I had a bunch of blueberries that I needed to use up. Today didn’t feel like a blueberry pie kind of day so I decided to make cake instead. Blueberries and lemon form the perfect sweet and sour flavor combination. Specially if you get blueberries when they’re in season and are at their peak, practically bursting with juicy sweetness. This recipe makes a super moist cake that’s great for breakfast or for an afternoon snack with a nice cup of hot tea.

Speaking of which, I saw a picture somewhere (probably on Pinterest) of a blueberry cake that was cut in small little rounds so I decided to try doing that. I baked one loaf cake with half my batter, but poured the other half of the batter into an 8-inch round pan to make a thinner cake which I cut into little circles with a mini-biscuit cutter. Don’t those look adorable? How perfect for a dessert table or for my annual Mother’s Day tea party!

NOTE:  My kids love the crunchy sugar topping made by sprinkling granulated sugar over the loaves, but if you prefer to have a glaze for the topping, just omit the butter, replace the granulated sugar with 1 cup of powdered sugar, and stir in 2-3 tbsp. of lemon juice till it reaches a good consistency for drizzling.

A nice trick to help you remove a cake from a loaf pan is to line the bottom of the loaf pan with a strip of parchment paper long enough to go up the short sides and stick out at least a couple of inches past the edge of the pan on either side. After your cake has cooled for 10 minutes, grasp the ends of the parchment paper that stick out past the loaf pan and use them like handles to lift the cake up and out. You can then tip the cake on its side to peel the parchment strip off.

A cobbler is an old-fashioned American dessert that’s been around since the 1800’s. It’s traditionally made with fruit, like peaches or blackberries, that are baked in their juices and topped with a cakey or biscuit-like dough. There are different variations on how the topping is made depending on where you’re from.

A chocolate cobbler breaks from tradition in that it isn’t made with fruit, but as far as making it goes, it’s just as easy to put together as any fruit cobbler and it’s every bit as delicious! Served warm with a scoop of vanilla ice cream, it’s absolutely to die for. Whenever I make this, it disappears almost as soon as it comes out of the oven!

For the Chocolate Layer: 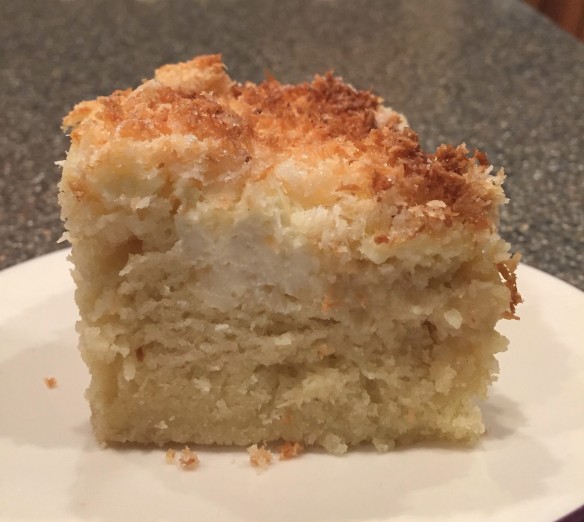 Living in the United States, we don’t always have easy access to Filipino food. I guess it depends on where in the U.S. you live. Unfortunately, where I live, if you want Filipino food, you need to make it yourself. There have been times when I’ve really been craving some native food from back home. This recipe was born from one of those cravings.

Filipino bibingka galapong is a native cake made of rice flour that’s cooked in a clay pot lined with banana leaves. As strange as it sounds, the sweet little cakes are dotted with pieces of quesong puti (carabao milk cheese) and wedges of itlog na maalat (salted duck eggs). Growing up, the best bibingkahan to get hot, fresh-made bibingka was a place called Ferino’s. It was started in 1938 by a man and his wife who made their bibingkas on three clay pots set on a bench. From there, the business grew till they eventually had shops all over town.

Anyway, I was craving the taste of Ferino’s bibingka one day. Since I don’t have a clay pot or banana leaves, and since we can’t get quesong puti or itlog na maalat where we live, I came up with this recipe which I called “Americanized Bibingka” because I baked it in a pyrex glass baking dish in the oven, and I substituted American ingredients for the native Filipino ingredients I couldn’t get – cream cheese for the quesong puti and dried shredded coconut for the itlog na maalat. It’s not Ferino’s, but it’s a really good substitute.

This recipe makes a big pyrex dish so it’s perfect for parties or get-togethers. Don’t expect it to look anything like traditional native Filipino bibingka galapong. Just follow the recipe and you’ll get a good taste of what bibingka is like, albeit without the look. Everybody loves it, including all our American friends.

NOTE:  If you can’t get self-rising flour, you can make your own by mixing together:
4 cups all-purpose flour
2 Tbsp. double acting baking powder
2 tsp. salt